Scope of Application
This technology is applicable for vertical wells, highly-deviated wells and horizontal wells after cementing cased well and completion. Detailed applicable casing parameters are as follows: 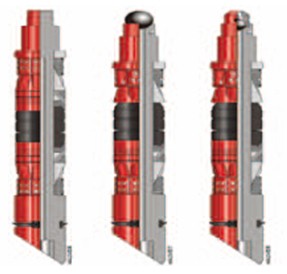 (3)Perforating gun
Multistage option switches are adopted by the perforating gun with a maximum of 40 switches  be adopted for each perforating job. The perforating gun is appropriate for repeated perforating jobs in short perforation interval. The success rate of ignition and the perforation rate of the gun is 100%.
(4)Wellhead equipment
The wellhead pressure control equipment is produced by Elmar and its working pressure and maximum sealable wellhead pressure are 105MPa and 86MPa respectively.
Technical Features
The specially designed bridge plug-perforating gun string with selective ignition switch can carry out bridge plug setting and perforating gun ignition from bottom to top successively and realize flexible clustering perforation.
(1)With a working pressure of 105MPa and a maximum sealable wellhead pressure of 86MPa, the BOP and lubricator can effective guarantee the safety of wellhead construction.
(2)The secondary mixed gunpowder and pressure balance design of bridge plug setting tool ensure the reliability of bridge plug setting and releasing.
(3)The pressure and temperature resistances of bridge plug are 83 MPa and 177  ℃ espectively. The pressure is sustained bi-directionally from top to down.
(4)The body of the bridge plug is made from composite materials with high acid resistance ability, and it can maintain its shape for 100 days in 20% hydrochloric acid under 149 ℃ . The body can
be easily grinded and milled; the grindings are small and can be easily returned.
(5)Multistage option switches are adopted by the perforating gun without any movable spare parts, so that the reliability of perforation is increased.
(6)No killing operation is required for the multi-layer continuous construction and the risk for injury is reduced.

Service Performance
As of June 2013, the Plug & Perf Multi-Stage Fracturing Technology has been applied for 11 wells domestically. The drilling and milling of bridge plug has been completed successfully and has realized signifi cant effect in increasing yield. Maximum 18 fracturing stages can be achieved on a single well and the maximum pumping termination pressure is 60.1MPa. For instance, Zhang XX well obtained 152.7 t/d high yield oil fl ow after being fractured with 2,100 cubic meters of fracturing liquid. For another instance, a shale gas well obtained a wellhead pressure of 21MPa and a daily gas output of 200,000 cubic meters after being fractured by 30,000 cubic meters of fracturing liquid and installed with a 7 mm oil nozzle. 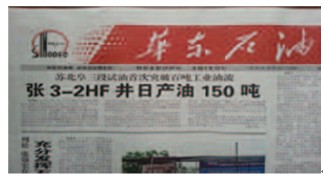 Picture of a Clip for High-Yield Zhang XX Well