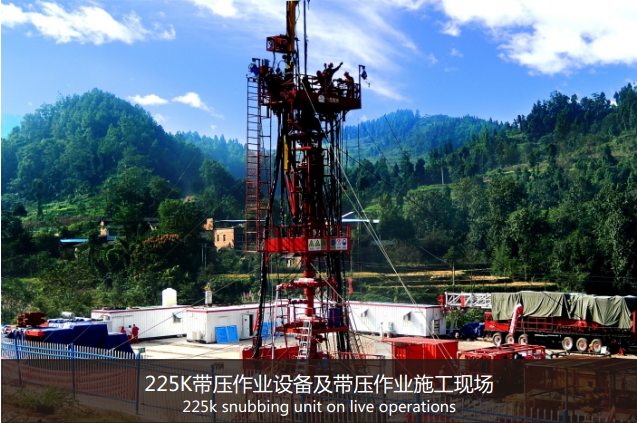 Dragon provided the snubbing services across the major oil fields in China. It currently consists of three Hydra Rig 225k standalone snubbing units, three Caterpillar powerpacks, two sets of well control equipment, and auxiliary equipment, which can be used in wells at the pressure with up to 105MPa. The work string sized from 1-1/4” to 5-1/2.  We have provided snubbing services for Jianghan oil field, Puguang oil field, Tarim oil field, and Huabei oilfield. The services included completion tool string tripping, well completion, perforation, fracturing, milling, wash over, and paraffin washing etc.

Introduction of snubbing
Snubbing refers to a workover operation, by which specialized equipment is utilized to operate on live wells. During the snubbing operation, wellbore pressure can be maintained, and thus eliminate the necessity of well killing (washing) and pressure release. For oil wells, the greatest advantage of a snubbing operation is that, original formation pressure is kept, which effectively avoid the formation damage. The snubbing reduced the necessary well stimulation such as acidification and fracturing while this is usually needed in a traditional pressure control method.

For oil and gas wells, the process of killing the well and bleeding off the wellhead won’t be necessary. This saves the costs of killing fluid, the equipment to pumping the killing fluids, protecting the formation.

Advantages of snubbing service
1.Snubbing operation provides a new idea for exploration and development of oil and gas fields. Well killing is a traditional approach to balance formation pressure, avoiding well blowout. With applying the snubbing in the well, the string tripping, and well testing & logging, etc. can be completed without killing the wells.

2.The technology maintains formation pressure without using killing fluids. In a traditional well control method, killing fluid caused pollution and induced a negative effect to well data acquisition, well completion, well testing and ultimately reduced in the production loss. The physical properties of the oil and gas wells during the snubbing operation are less likely affected during the snubbing. However, the traditional killing fluids often result in blocking the perforation channels, other side effects include the induced mud cake leading to incorrect stratigraphic interpretation, expansion of water-sensitive minerals weakening the wellbore stability.

3.The technology minimizes the operation risks compared to the traditional well control method. The risk of blowout control is high often due to the unbalanced bottomhole pressure during pumping the killing fluids. The subsequent effect needs more expensive operation expenses.

4.Snubbing is considered to reduce the operational cost and improve the productivity index at long lateral horizontal wells. The cost is saved because no well killing is required. The damage induced by the killing fluid is noticeable, in addition to the killing fluid cost. Secondly, it takes a long time to stop injection and bleed off the pressure during pumping, this process could take two to three months until half year.

The powerpack is located on the ground or platform deck, which provides necessary hydraulic pressure for the operations of lifting machine, BOP stack, slips, rotary tables, winches (500 kg) and power tongs.

Advantages: the powerpack is composed of 5 sets of pumps and separately provide power, failure of one set of pump won’t interfere with other pumps; besides, the built-in accumulator bottle can also provide adequate power for shutting or opening BOPs, slips, hydraulic plug valves, etc. after powerpack emergency shutdown. In order to improve the operation efficiency and increase the service life expectancy, 3-level oil supply system is used in the main system to automatically adjust the volume of oil supply according to the actual load.

Work basket sits on the top of jack, and is the working platform for operators. The control panels is located within the operating platform to control jack, traveling and stationary slips, BOP stack, CB wenches, etc.

Advantages: it equipped with three sets of self-contained escape devices for escaping to the ground from 3 directions at emergency circumstances. Each operator may choose the nearest escape closed to him to quickly escape to the ground.

The tripping of pipe string may be configured through 4 hydraulic cylinders, 2 leg mode or 4 leg mode It depends on the well conditions during operation. The telescoping tubing guide is located in the through-hole of jack for providing the centralizing and guiding so as to prevent pipe buckling.

Advantages: switching between 4 legs and any 2 legs. 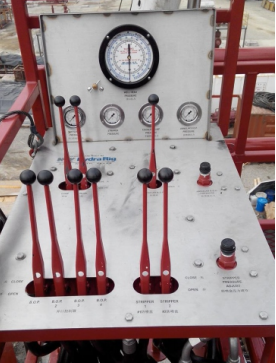 Control panel is consisted of three independent parts, wherein one part is the main operation panel for controlling jack, slips, etc., the second one is auxiliary operation panel used to control strippers , equalize loop, bleed off lines and 1# safety BOP etc., and the last one is CB wench control panel used to control the dual counter balance winch.

Advantages: each panel is independent and the operation requires three operators. 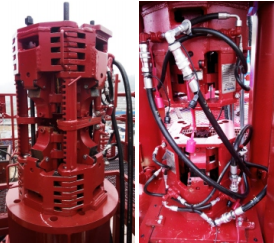 Slips group
The traveling slips are located on the rotary table and runs synchronously with jack; currently, the applicable tubing size of slips ranges from 1 1/4” to 5 1/2”.The stationary slips are mounted on the lower part of jack, which are used to hold the pipe string when the traveling slips open.
Advantages: each slip is separated, whose function may be adjusted according to different working conditions; besides, we have provided the special slip dies for chrome tubing to conduct such tubing operation; when the slip gets stuck in the coupling, the normal operation may continue, without tubing flying out or falling into well or slip damages; the centralizing plate can be installed on the slips according to the working conditions to prevent the tubing from being clamped. 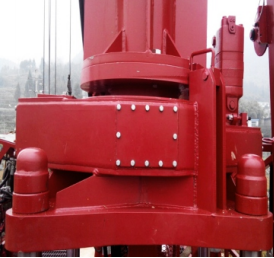 Rotary table
The rotary table is of hydraulic drive type, may be used for drilling and milling, Max. torque is 6,500 lb.ft and its maximum rotating speed is 46 RPM.

The BOP stack is the core equipment for operation under pressure; currently, we have 14 BOPs in total, stripper BOPs, safety BOPs, shear / fully-sealed BOPs, slip BOPs and annular BOPs. These can simultaneous be used on multiple wells. These include 10 Cameron type U single ram BOPs (7-1/16”, 105 Mpa), 2 shear ram BOPs and 2 annular BOPs (7-1/16”, 35 Mpa).

Advantages: it may be flexibly assembled into different configurations to meet the operational needs. The distance between 2 stripper BOPs needs to be long enough to avoid the coupling stucking at the BOP ram.